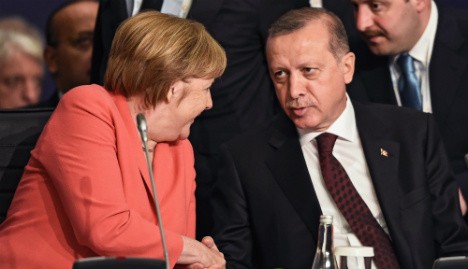 A report leaked through broadcaster ARD has revealed that the German government is cautious in its dealings with neighboring Turkey because “as a result of the step-by-step Islamization of its foreign and domestic policy since 2011, Turkey has become the central platform for action by Islamist groups in the Middle East.”

The report, meant to be confidential, is reportedly the written reply by Germany’s interior minister to a question from the left-wing Die Linke party.

The document pointed out that “the many expressions of solidarity and support actions by the ruling AKP and President Erdogan for the Egyptian MB (Muslim Brotherhood,) Hamas and groups of armed Islamist opposition in Syria emphasize their ideological affinity with the (broader) Muslim Brotherhood.” This is the first time that Germany has linked the Turkish state to terror and extremist groups.

Ankara is yet to react to the report. After last month’s failed coup, President Erdogan had also accused Germany of supporting terrorism warning that “let them feed the terrorists. Like a boomerang, it will hit them.”

Member of the bundestag, Sevim Dagdalen of the Die Linke party, questioned Berlin’s policies towards Turkey. “The German government cannot publicly designate the godfather of terrorism Erdogan as a partner, while internally warning about Turkey as a hub for terrorism.”

Relations between the two countries have been on the low especially after the German parliament recognized the 1915 massacre of Armenians by the Turkish Ottoman as genocide. The developments that followed the July 15 failed coup d’Etat in Turkey have further strained the two countries’ relations. Germany is home to the largest Turkish diaspora in the world with around 3 million people of Turkish origin and estimates have claimed that 25% of German citizens who have left to fight for the Islamic State are from that quota.