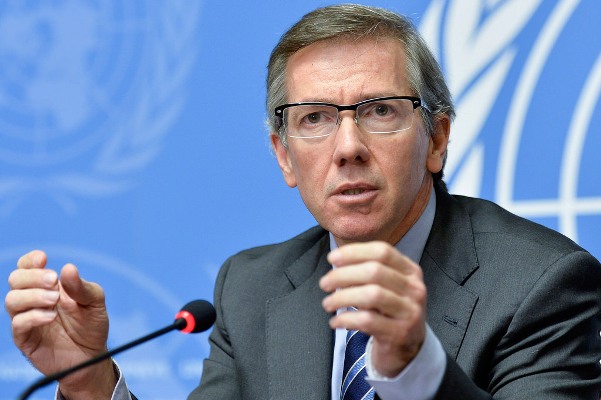 Libya internationally-recognised Parliament in Tobruk has rejected the U.N. peace proposal aiming at ending power struggle and chaos in the oil rich country now on its knees.

Senior lawmaker at the Tobruk-based parliament, Tareq al-Jouroushi, said on Tuesday that most delegates rejected the draft.

“A majority of deputies voted to reject the proposal,” he said.

U.N. envoy Bernardino Leon had expressed cautious optimism that the deal would win consensus among rival groups, but Tobruk delegates rejected the content of the draft.

The draft presented in Morocco suggests a power sharing deal between the rival groups which in the opinion of Tobruk delegates is unacceptable.

The draft also proposes formation of a Tripoli-based National Accord Government, to be worked out between the negotiators.

The internationally recognized parliament, known as the House of Representatives, would remain in place as the official legislature. The Islamist-dominated Tripoli-based parliament would be dissolved, but 90 of its members would be included in a new 120-member body known as the High Council of State. The draft says the council would be the “highest consultative body” and that its opinion would be binding on drafting laws and government decisions.

The draft calls for a mechanism to integrate militias into the armed forces. It also calls for the National Accord Government to act as an executive authority with control over vital state institutions and crossings.

Furthermore, under the deal, the Prime Minister would assume the post of supreme army commander.

Essa Abdel-Kauoum, the spokesman for the internationally-recognized parliament’s negotiators,  was quoted as saying that “Leon brought us to square one … to appease an ideological group in a horrible way. He succumbed to extortion.”

The opposite Libyan side welcomed the new peace draft. “We think this has achieved a tangible positive improvement which should be taken seriously and built upon to reach an agreement that ends the political division and achieves stability,” said Mohammed Sawan, leader of the political arm of Libya’s Muslim Brotherhood.

Analysts fear that this new development will widen divisions among Libyans and delay any plan to fight the Islamic State group.

Libya has been in complete disarray since the fall of Col. Mohammar Gaddafi in 2011 and the country has been since then a heaven for Jihadist fighters.

EU leaders are also pushing Libyan politicians to reach an agreement that will help establish official institutions capable of combatting human traffickers that send floods of illegal migrants to European coasts. Thousands have already lost their lives during the crossing of the Mediterranean Sea.