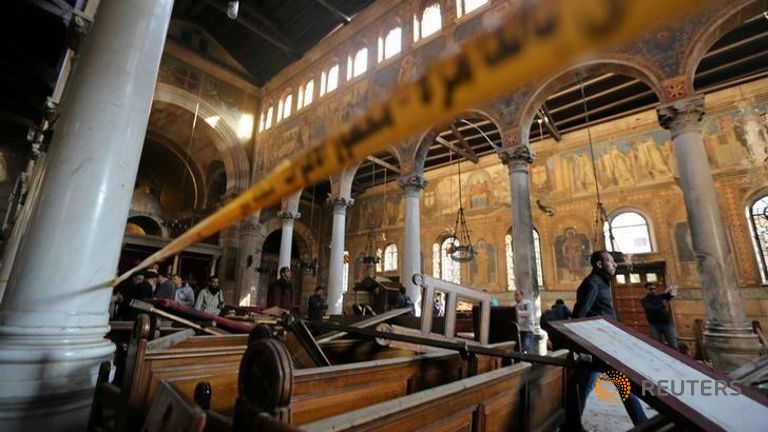 The Islamic State (IS) group has claimed responsibility for the Sunday suicide bombing in a Coptic cathedral in Cairo that killed at least 25 people and injured more than 49.

In a message posted online through its media, Amaq, IS warned that “every infidel and apostate in Egypt and everywhere should know that our war … continues.”

Prior to the statement, Egyptian authorities linked the attack to the banned Muslim Brotherhood and identified the suicide bomber as 22 year old Mahmoud Shafik Mohamed Mostafa who had been arrested at a Muslim Brotherhood protest in 2014 before being freed on bail after two months. IS identified the suicide bomber as Abu Abdallah al-Masri; a nom de guerre.

The Interior Ministry stated that “financial and logistical support” for the bombing was provided by leaders of the Brotherhood as it claims that Mahmoud joined a cell led by Mohab Mostafa Sayyed Qassem, a militant with links to IS fighters in Northern Sinai and exiled Brotherhood officials in Qatar.

Sunday’s attack was the deadliest militant attack on Egyptian civilians in years and the country’s worst act of sectarian violence since the bombing of another Coptic church in Alexandria in 2011. The government is strongly being blamed for failing to protect the Egyptian Copts who account for around 10% of the population as they continue to deplore the systematic discrimination they face in the country. Cairo usually blames the Muslim Brotherhood for trying to destabilize the country by supporting and funding attacks while it struggles to contain extremist groups in the Sinai Peninsula.

The Islamic State group emerged in 2014 and it has proven to be one of the deadliest extremist groups in the Middle East and North Africa.