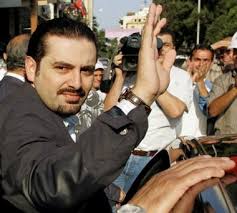 Saad Hariri, a Lebanese politician close to Saudi Arabia who has been on a self-imposed exile since the toppling of his cabinet in 2011, returned to his native country to commemorate the 11th anniversary of the assassination of his father; Rafik al-Hariri.

In a speech delivered at a rally, Saad Hariri said lawmakers need to elect a president unless their “real candidate is the vacuum” which has existed for 21months.

Lebanon has been without a president since the end of Michel Suleiman’s six-year term in May 2014 and Hizbullah, the Free Patriotic Movement (FPM) and some of their allies have been unable to agree on a consensus president, repeatedly boycotting the parliamentary sessions for the President election.

The Lebanese “have paid the price at home and abroad,” Hariri said, stressing that Lebanon will neither be “an Iranian province” nor hostile to Riyadh.

Politics in Lebanon is strictly divided on sectarian lines and Saad Hariri, a Sunni and leader of the Al-Mustaqbal Movement and the March 14 Alliance, said he is behind the proposal as President of Suleiman Franjieh, a Member of Parliament for the Maronite seat of Zgharta-Zawyie, in North Lebanon, and one of the strongest allies and a close personal friend of Syrian President Bashar Assad.

Saad Hariri took a swipe at Hezbollah, which supports Aoun, as he stated that “the Lebanese presidency deserves more attention and efforts than the Syrian, Iraqi or Yemeni presidencies.” He said focus should be on “ending the siege on the presidency, the government and the parliament” in the country rather than taking part in besieging Syrian towns.

He boasted that Al-Mustaqbal “does not fear” elections as long as the candidate abides by “the Taef Accord, the law and constitution, and coexistence,” and as long as he puts “the national interest and Lebanon’s safety ahead of any regional scheme.”

A message was also addressed to Iran. “We will not allow anyone to pull Lebanon to the camp of hostility towards Saudi Arabia and its Arab brothers. Lebanon will not be, under any circumstances, an Iranian province. We are Arabs, and Arabs we shall remain,” underlined Saad Hariri.