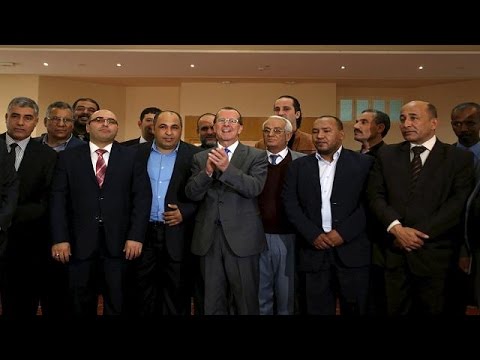 Libya’s presidential council has announced a new 18-member national unity government under the UN-backed Libya Political Agreement (LPA) and is now awaiting its approval by the Tobruk-based Parliament which rejected the first proposed 32-member cabinet deeming it too large.

Fayez Seraj, head of the presidential council and Prime-Minister designate, said the appointments were made based on “experience, competence, geographical distribution, as well as on the political spectrum and the components of Libyan society.”

However, disarray has already began to surface as some members of the council refused to sign the cabinet proposal and as critics deplored that former Gadhafi’s aides are part of the cabinet.

In a televised announcement, Presidential council member Fathi al-Majbari said they are calling on “Libyans suffering from the fighting … and the members of parliament to support the government of national accord, which will provide the framework to fight terrorism.”

UN special envoy to Libya, Martin Kobler, tweeted that the proposal is “a unique peace opportunity that must not be missed.” He said it is “crucial now” that the House of Representatives in Tobruk approves it.

Seven of the nine members of the presidential council signed the cabinet proposal which suggests 13 ministers and 5 ministers of state. Most of the names that were proposed in the cabinet rejected last month were replaced but Mahdi al-Barghathi is maintained as defense minister.

There are fears that the proposal could be rejected, delaying plans to effectively fight terrorism, after the Libyan permanent envoy to the UN, Ibrahim O. Dabbashi, said the proposed cabinet “will only give parliament a reason to reject it” because some of the appointees were close to Colonel Gadhafi during his long stay in power.