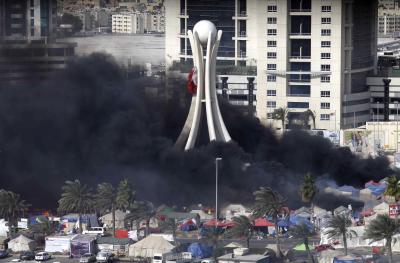 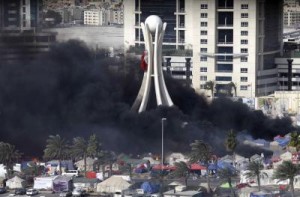 on Saturday entered its 4th day on Tuesday and are likely to continue as tempers continue to flare while government announced that it was halting all flights to and from Iran. The protesters have clashed with security forces in several Shia dominant towns raising concerns about the country’s volatile political environment which has been sensitive since the beginning of the Arab Spring in 2011.
Majority of Bahrain’s population are Shias but the Sunni minority controls power and is a major ally of Saudi Arabia in the Gulf. Analysts believe that the protests are a continuation of the protests that started in 2011 when Shias demanded a greater political role, more freedom and the respect of their rights as they feel sidelined by the Sunnis ruling the island kingdom. Riyadh sent in troops to help quash what was considered as an uprising against the authorities.
Bahrain has long accused Iran of meddling into its domestic affairs and after the chaos at the Saudi Arabian embassy in Tehran, it recalled its ambassador to Tehran on Monday and ended their limited diplomatic ties before giving Iranian charge d’affaires 48hours to leave the country. Iran does not have an ambassador in Bahrain. Other Arab countries have downgraded, recalled their ambassados or ended their diplomatic ties with Iran
Meanwhile, a unified position against Iran by the Gulf States is expected to be decided during the weekend when foreign ministers of the Gulf Cooperation Council (GCC) meet on Saturday in Riyadh according to Secretary General Dr. Abdullatif bin Rashid Al Zayani. The meeting will be held under the chairmanship of Saudi Arabia’s Foreign Minister Adel Al Jubeir.