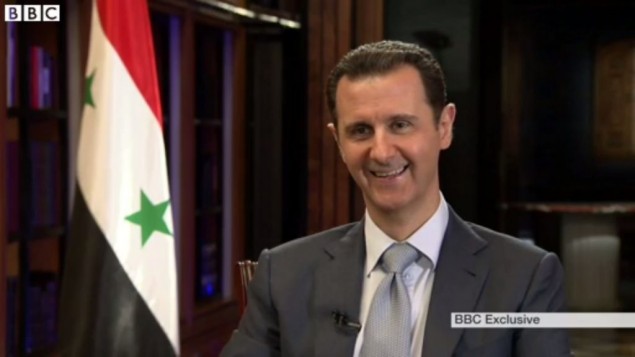 Peace will return to Syria only when the West and its Middle East allies stop supporting the terrorists battling the Syrian regime.

The statement was made by the controversial Syrian leader Bashar Assad in an interview aired Tuesday by the Czech TV.

The Syrian President bashed France, US, UK and Saudi Arabia as well as Qatar for supporting terrorists who have weakened his regime, saying that his regime is still standing thanks to Russian intervention.

He said that as soon as these countries stop supporting the terrorists, the situation will be better and “in a few months we will have full peace in Syria, definitely. If they stop.”

On the Russian intervention in Syria, Assad argues that Moscow truly fights terrorists contrary to the West, Saudi Arabia and Qatar which provide financial and technical support to the terrorists.

“If you want to fight and defeat them (terrorists), you have to cut and suffocate their supplies, their armaments, money … coming mainly through Turkey and with the support of the Saudis and the Qataris,” he said.

Assad also argued that France’s recent military frenzy in Syria against ISIS is “nothing serious” accusing France of just trying to “dissipate the feeling of the French people.”

France, US, UK, Saudi Arabia and Qatar have for long expressed their desire to see Assad sidelined and removed from power. They accused him of massacring his own people following 2011 uprising against him.

For Assad, the rhetoric has gradually changed with the threat of IS becoming increasingly alarming.