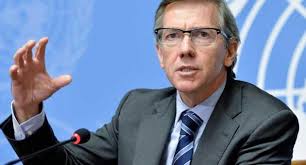 The new U.N special envoy to Libya Martin Kobler stressed that an agreement for a Libyan unity government must be put in place even if there is a lack of consensus of parties involved.

Kobler told participants in the 7th ordinary ministerial meeting of Libya’s neighboring countries, held in Algeria Tuesday, that the rival parties in Libya should boost their efforts and “advance to reach the formation of a national unity government as soon as possible.” He stressed that an agreement has to be sealed “even if not all parties are satisfied.”

The two rival governments in Libya are trying to promote their agenda in the agreement but Kobler believes that Libyans will applaud a peace deal “even if there is no consensus.”

Discussions at the ministerial meeting focused on means of implementing the peace draft agreement reached in Morocco in July and that must be endorsed by the two rival parliaments.

Libya’s neighboring countries are concerned about their security as terrorism activities are thriving in the North African country and spilling over its neighbors, mainly Tunisia and Egypt.