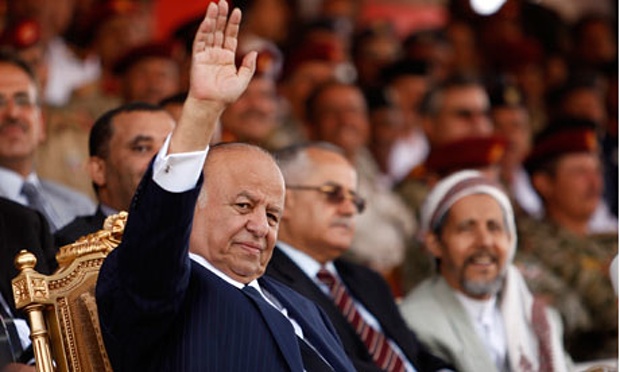 Yemeni President Hadi met a delegation of ambassadors accredited to Saudi Arabia and seized the occasion to extend the appreciation of his government and the Yemeni people for the support they have been receiving for the return of peace to the country.

He blamed the Houthis and former president Saleh for triggering the violence that has turned into a war. Saleh has reportedly been fired by his party as key members have rebelled against him.

The meeting was held in Riyadh and was attended by the ambassadors of member countries of the Gulf Cooperation Council, permanent U.N security Council members, Germany, Netherlands, Turkey, Japan and Egypt. The group of ambassadors that attended the meeting is often referred to as the G18.

Hadi renewed his calls for the withdrawal of the Houthis from occupied areas after their “military coup against the will of the Yemeni people and the outcome of the national dialogue.”

He told the G18 that “the dialogue covered all issues and was conducted in a transparent manner.” Yemenis seek more international support to pressure the rebels abide by resolution 2216.

The Houthis have recently sent a letter to the U.N saying they were willing to negotiate to end the war but the Hadi government ignored their request claiming it did not receive any formal demand in this regard.

Earlier this week, Hadi sacked ministers Hassan Zaid and Ghaleb Abdullah Mutlaq from his government because of their alleged ties with the rebels.