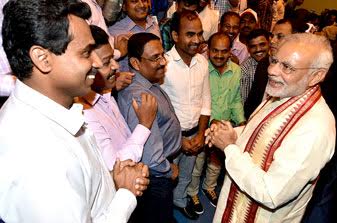 Prime Minister Narenda Modi of India arrived in the United Arab Emirates on Sunday for his maiden visit that is expected to focus on economic and trade ties as well as labor welfare for Indian expatriates.

The Indian Premier’s two-day visit takes place at a moment when Qatar and the UAE have been heavily criticized for the poor conditions provided to the low skilled laborers who are mostly from Asian countries.

A senior government official was quoted by Reuters in New Delhi as stating that “the government wants to send a clear message that India will not allow rampant exploitation of its workers.”

He added that Modi will also make it clear that “the safety, security and welfare conditions for Indian workers” must be secured.

UAE and Qatar provide employment for a significant number of Indians and figures presented by the Indian embassy stated that around 2.6million live and work in UAE alone with 60% doing office jobs.

Before his visit, Prime Minister Modi said he aspires to see UAE become India’s “foremost trade and investment partner” and acknowledged that the Gulf region is “vital for India’s economic, energy and security interests.” He believes that the two countries have a “range of common security and strategic concerns in the region, including terrorism and extremism.”

An Indian senior official said Gulf countries have always been focused on the U.S and Europe but Modi will use his visit to “highlight the benefits of investing in India” and “engage Abu Dhabi on long-term projects.”