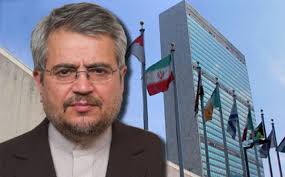 The draft resolution concerning the deal reached by the P5+1 and Iran submitted to the Security Council during the weekend has been endorsed on Monday.

The endorsement is a significant step towards the lifting of sanctions imposed by the Security Council on Iran but some of the conditions in the draft seem unwelcome in Tehran which deems they crossed the military “redlines.”

The draft was unanimously supported by the Security Council members with the U.S ambassador to the U.N Samantha Power saying that it will help make the world “safer and more secure” before raising concerns about Tehran’s human rights violations, support to armed groups in the region, continuous threats against Israel and other destabilizing regional activities.

Her comments were unwelcomed by the Iranian ambassador to the U.N Gholam Ali Khoushrou who claimed that they were “baseless accusations.” He held Washington responsible for creating favorable grounds for the growth of terrorism and extremism in the Middle East.

The endorsed draft is already being questioned in Tehran as state-run media quoted Commander Mohammad Ali Jafari of the Revolutionary Guard Corps stressing that “we will never accept it” because, he said, some parts of the UN draft “have clearly crossed the Islamic Republic’s redlines, especially in Iran’s military capabilities.”

Israeli Prime Minister Netanyahu believes that the endorsement of the draft by the Security Council will not be “the end of the story” as he continues to hope that the U.S Congress will reject the agreement. Israel’s ambassador to the U.N Ron Prosor also told a press conference that the endorsement was “a great prize to the most dangerous country in the world” that will continue growing its “empire of terror.”