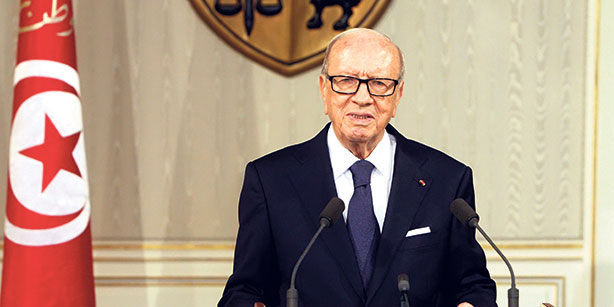 Tunisian President has declared a state of emergency after the nascent Tunisian democracy following the 2011 Arab Spring has been rocked this year by two deadly attacks perpetrated by young Tunisian jihadists.

The attacks that targeted the Bardo Museum in Tunis and the tourism resort city of Sousse have plunged the country in an uncertain future, threatening Tunisian economy and international reputation as one of the most secular Arab countries.

The state of emergency was declared while Tunisia is slowly emerging from a most chocking terrorist attack perpetrated just over a week ago by a young Tunisian allegedly trained in Libya. He gunned 38 people most of whom Britons tourists who were sunbathing on the beach.

President Beji Caid Essebsi who called, in a televised address, the international community to define a common strategy to combat terrorism said he has declared a state of emergency in order to avoid further attacks as the country is still targeted by jihadists.

Several officials had been fired in the wake of the attack, including the governor of Sousse, after authorities and security forces were harshly criticized for not responding quickly enough to the attack.

“Due to the terrorism risk, and the regional context, and spread of terrorism, we have declared a state of emergency,” Essebsi said in the address.

“The continued threat we face leaves the country in a state of war, where we have to use all measures necessary.”

The state of emergency, to be in place for a renewable period of 30 days, grants the police and army forces more power to carry out arrests of people or groups deemed a threat to public security.

The Bardo museum attack in March that left 22 people killed and the Sousse attack have deteriorated the tourism industry in Tunisia considered as the main GDP contributor.

In an interview on Sunday, Tunisian Prime Minister Habib Essid, said the perpetrator of the June 26 attack, Seifeddine Rezgui, worked in the tourism industry.

‘’We are aware that he was member of a breakdance club and that he knew very well the tourism sector after working there as entertainer,” said Essid in the interview.