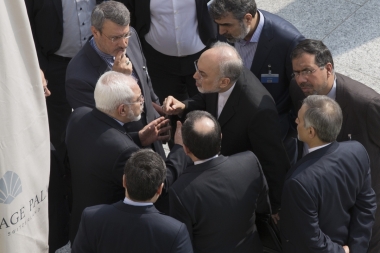 Talks regarding the Iranian nuclear program which started in 2002 could be nearing their end next week but the situation behind the closed doors offers much more of pessimism than optimism as both parties agree that there are still major roadblocks ahead of the June 30 deadline.

French Foreign minister Laurent Fabius told reporters in Vienna that Paris wants “a robust deal that recognizes Iran’s right to civil nuclear power, but guarantees that Iran gives up definitively the nuclear weapon.” Such a guarantee might not be forthcoming as his Iranian counterpart Mohammad Javad Zarif said “if the other side…takes positive steps and does not make excessive demands, we will certainly reach a deal that benefits everyone.”

Fabius stressed that “a lasting limitation of Iran’s research and development capacity, a rigorous inspection of sites, including military if needed, and the third condition is the automatic return of sanctions in case it violates its commitments” are “indispensable conditions” for France to support a deal.

U.S Secretary of State John Kerry said that despite “some very though issues” and a “lot of hard work to do,” he remains “hopeful” and thinks that “everybody would like to see an agreement.” Kerry and Zarif met on Saturday in Vienna in an attempt to advance the negotiations.

“We need to work really hard in order to be able to make progress,” Zarif said while his deputy Abbas Araghchi said “some major problems exist and they are still blocking the work… but in other areas we have made good progress.”

Two diplomats familiar with the talks said Tehran has shown renewed interest in the once publicly rejected ‘export-and-sell option’ of its enriched uranium. They also hinted that talks could go beyond the deadline.