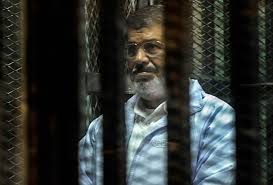 An Egyptian court has confirmed the death sentence issued last May against toppled Islamist president Mohamed Morsi for escaping from prison during the 2011 popular uprising that led to the fall of Hosni Mubarak regime.

The ruling however can be challenged in Egypt’s highest appeals court. More than 100 other runway inmates were also sentenced to death in absentia for fleeing Wadi Natroun prison after it was stormed by demonstrators who overpowered prison guards.

Morsi is accused of conspiring with foreign militants, including Hamas in a plot hatched to free Islamists during mass prison breaks amid the 2011 uprising that brought down Hosni Mubarak’s 30-year rule. One year later, Morsi was elected president but his fussy management irked a lot of Egyptians and triggered widespread protests.

The Egyptian military removed him from power in July 2013 following several months of pro-democracy demonstrations and sit-ins that paralyzed the country and battered its economy.

According to some Middle-East experts, the execution of Morsi and other senior leaders of the out-lawed Muslim Brotherhood organisation will likely spur strong and violent reactions from their Islamist supporters who say the charges and trials are politically motivated.

In a separate case, Morsi was sentenced to life in prison for espionage and conspiracy with foreign armed groups, including Hamas, in order to commit attacks.

He is currently serving a 20-year jail term for the killing and torturing of opposition protesters outside the presidential palace in Cairo while he was in power in 2012. He also faces other charges of fraud and insulting the judiciary.

So it appears that the Egyptian government and President Abdelfatah Al Sisi have a lot of challenging decisions to make but only time will tell how things will unfold.