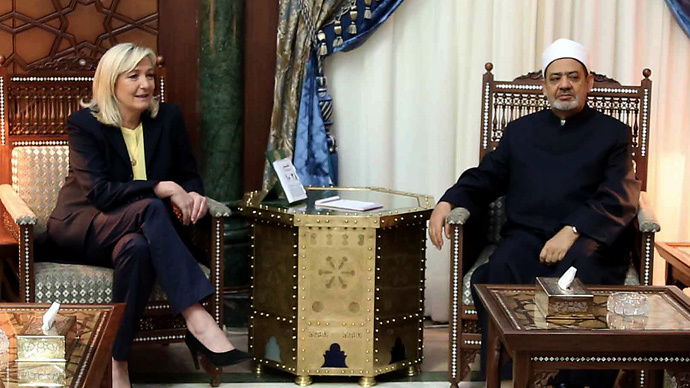 “President Sisi is one of the leaders who sends the clearest message against extremism,” Le Pen told reporters during a visit to Cairo.

“The choice for the National Front is clear: support countries fighting fundamentalism, first and foremost Egypt,” she said.

Criticized in France as anti-Islam for her controversial stands, Marine Le Pen’s visit in Cairo is portrayed as a strategy to improve her image and that of her party.

Her party adopted strong positions against the use of veils by women in public places in France and is accused of racism against Muslims in France.

Besides talks with Prime Minister Ibrahim Mahlab,  she also met, at her request, Ahmed al-Tayeb, the Grand Imam of Al-Azhar, top Sunni Muslim body, who voiced concern over what he said was the National Front’s “hostile positions towards Islam and Muslims.”

The meeting which triggered an uproar of criticism, prompted the Imam to issue a statement explaining that he accepted to meet the French rightist woman part of his institution’s opening on all ideological trends, and its endeavors to confront everything that offends Islam and to enlighten foreign public on the genuine principles of moderate Islam, its tolerance and acceptance of others.

Egypt is now confronted with a surge in terrorism and extremist attacks, especially in the Sinai. Since taking power in 2013 through military intervention, president al-Sisi has used an iron fist to crackdown on the Muslim Brotherhood.

Egyptians authorities have banned the Muslim Brotherhood and blacklisted it as a terrorist organization. Most NGOs and charity associations linked to the organization have been dismantled.