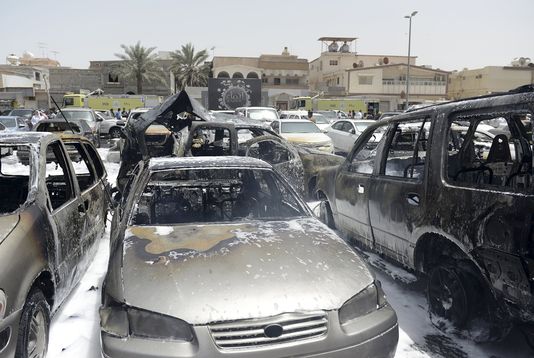 Jihadist  group ISIS has hit again Saudi Arabia this Friday during noon prayers by killing four people including the bomber in a suicide blast at Al-Anoud Mosque in Damma, a Shi’ite mostly populated Eastern Saudi province.

Witnesses at the scene said a suicide bomber disguised in women’s clothing succeeded in detonating his belt as security personnel were nearing him to stop him from blow his device.

The blast went off in the parking lot of the mosque that houses more than 5,000 worshippers.

The blast killed four people including the bomber, security officers and another civilian. It also set other cars near ablaze.

“The bomber detonated the explosive belt he was wearing at the mosque entrance as security officials were on their way to inspect him,” said a spokesman from the interior ministry to the Saudi Press Agency.

The death toll could have been worse if security personnel did not halt the bomber at the entrance of the mosque.

Security officials said security personnel identified a fishy car that was parked outside the mosque with man donned in women’s clothing but before they reached the car, it went off killing four people and injuring few.

ISIS issued a statement in which it claimed responsible for the attack, naming the bomber as Abu Jandal Al-Jizrawi whom it praised for reaching his target despite tight security measures.

The group claimed responsibility for the previous Friday attack at another Shi’ite mosque in al Qadeeh village, near al-Qatif city, that killed 21 and wounded nearly 100.

Saudi Arabia fears a sectarian division between Shi’ites and Sunni that may descend the whole country into disarray.

The same concern is shared in the region. Kuwait Emir, Sheikh Sabah al-Ahmed al-Sabah called for immediate action to stem the threat.