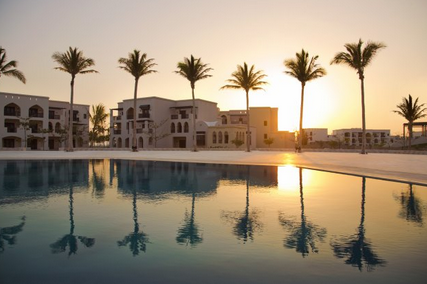 The first Integrated Tourism Complex (ITC) is set to create 800 direct jobs to launch in seven years in the Sultanate of Oman, according to Sheikh Hamood bin Sultan Al Hosni, CEO of Saraya Bandar Jissah. The ground-breaking ceremony for the second major construction stage of the project took place in the presence of His Highness Sayyid Asa’ad bin Tariq Al Said, Representative of His Majesty Sultan Qaboos bin Said among other dignitaries and business leaders.
The $600 million project will create two five star hotels with 318 rooms, complete with a beachfront ballroom for weddings and events, international cuisine restaurants and sports activities, including a dive center. 398 exclusive residential units as well as hilltop villas, stylish townhouses and luxury apartments will also be included in Saraya Bandar Jissah.
During the ceremony, Al Hosni said that the “the long-term benefits are not only to increase tourism but also the job opportunities the development will create. More than 800 direct jobs will be created and further indirect jobs will be created for the overall economy.”
The first phase of the project will be completed in 2017, the second phase 2020. Development and training programs are to be provided for the Omani employees to prep them. Al Hosni added that “focusing on three main areas, education, environment and community, Saraya Bandar Jissah is working closely with the local communities and Shura Council to make sure all CSR projects create the maximum impact.” Some of our CSR projects are external scholarships for students, constructing public buildings in the nearby community and, also, other different social activities.”
The President and CEO of Jumeirah Group, Gerald lawless, believes that the project will have a significant impact on the development of tourism in Oman.