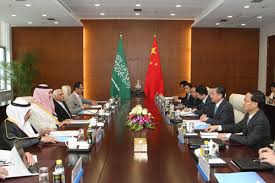 Saudi Arabian Crown Prince Salman Bin Abdulaziz Al Saud has concluded his four day tour in Beijing that began on the 13th of March by signing several aspects of cooperation before issuing a joint statement. He held meetings with China’s political key figures amongst which are the President Xi Jinping, Vice President Li Yuanchao and Premier Li Keqiang during his visit. Regional and global issues concerning the two countries were discussed.  Crown Prince Salman doubles as the Deputy Prime Minister and Defense Minister of Saudi Arabia.
China didn’t hide its appreciation of Riyadh’s effort to accelerate the approval of a free trade agreement between the members of the Gulf Cooperation Council and China. Plans are already being made to conclude an early agreement.
Saudi Arabia has maintained itself as an important oil producing country in the world for several decades whilst China’s energy demands have been on the rise for several years. To curb the pressure, both countries renewed their commitment to intensify their energy cooperation. Other domains such as trade, mineral resources, investment and infrastructure building, as well as in high-tech fields including aerospace and the peaceful use of nuclear power will also be reinforced.
The joint statement also dwelled on the crisis in Syria and the latest bombings in the Chinese city of Kunming. Beijing and Riyadh agree that the ending of the Syrian conflict requires the formation of a transitional governing body as stated in the Geneva Communiqué. Both sides are opposed to terrorism in any form, and are also opposed to linking terrorism to any religion or any religious sect.
Saudi Arabia and China agreed to work together in ensuring a Middle East free of nuclear weapons and weapons of mass destruction too.