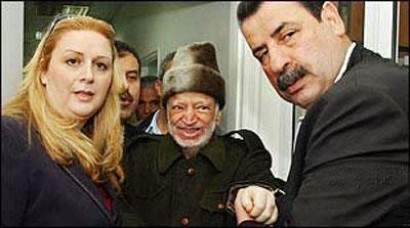 Eight years ago,  Yasser Arafat, Palestinian Liberation Organization (PLO) leader died at the age of 75 in a Paris military hospital shortly after an unexplainable illness. He was then buried in front of a crowd of thousands in his Ramallah headquarters. The French officials concluded that the death was caused by a blood disorder.
However, a new development to the story was made this year after Yasser Arafat’s wife Suha Arafat accepted to give some of her husband’s personal items to Al Jazeera television which made submitted them to a series of tests by a laboratory in Switzerland. After many test, the Institute of Radiophysics discovered traces of a radioactive poison  polonium-210, by  which a Russian spy was also murdered in 2006. Since Arafat’s wife is a French citizen she called for her government to begin an investigation on the claims her husband might have been murdered. However, the Palestinian Authority, suspicious of this foreigner who is not such a popular figure in the country called in Russian scientists to do separate analysis. That was why Yasser Arafat’s body was exhumed in the cover of darkness by gravediggers. Then a Palestinian doctor took over 20 samples under the watchful eyes of both French and Russian experts. The whole process was kept under deep secret in order to protect Arafat’s remains according to Palestinian officials.
Alongside the autopsy of the body, French magistrates have been questioning Palestinian officials who were besieged with Arafat in the Muqata since they started suspecting that Yasser Arafat could have been poisoned by someone from the inside since there was no mass poisoning. If Arafat was found to be murdered at the end of this investigation, the guilty party is believed by many Palestinians to be the Israelis.