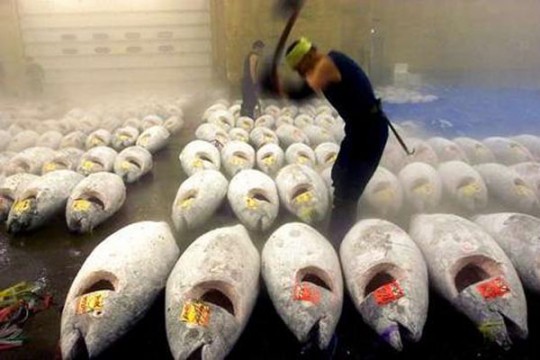 The equivalent of 18,704 tons of live bluefin tuna, a protected species subjected to fishing quotas, were traded via Panama between 2000 and 2010, without being reported to the International Commission for the Conservation of Atlantic Tunas (ICCAT) – the international body managing the fishery, reported on Wednesday the World Wildlife Fund.
The WWF, a leading organization in wildlife conservation and endangered species, said in a release that the unreported trade was uncovered by a study conducted at the initiative of the fund.
Based on official trade and customs databases, it has been revealed that over a decade as much as 14,327 tons of processed Atlantic bluefin was traded via Panama. This volume of trade corresponds to an estimated weight of 18,704 tonnes of live fish.
According to the study findings, bluefin tuna has been exported to Panama from Mediterranean countries including Spain, Italy, Morocco, Tunisia, and Turkey. Panama, in turn, re-exported to Japan as much as 13,730 tons of processed bluefin.
The trade detected peaked in 2003 and 2004, with 3000-4000 tons per year, but was still on-going at a lesser extent as late as in 2010, said the WWF which called on ICCAT, the countries identified in the study and the European Union to urgently launch a serious investigation that would allow to either ruling out or endorsing the suspicions of illegal, unreported and unregulated activities pinpointed by the study.
“This is the first ever study on this issue and it probably shows only the tip of the iceberg,” said Sergi Tudela, Head of WWF Mediterranean Fisheries Program.
“According to available records, not a single shipment identified by the report was ever reported to ICCAT,” he added.
According to ICCAT rules in force during all the study period, any international trade of Atlantic bluefin tuna had to be duly reported, to enable cross-checking with catch quotas.
According to ICCAT, illegal, unreported and unregulated activities in the bluefin tuna fishery peaked in 2007 with an estimated catch at 61,000 tons, worth more than twice the legal quotas. There is consensus that recent catches have significantly reduced, but strong doubts still exist as to the real amount of fish being caught.
ICCAT 48 member countries will meet November 12 to 19 in Agadir (southern Morocco) to set tuna fishing quotas, including bluefin tuna quotas.
The ICCAT scientific committee recently reported a recovery of bluefin tuna in the Mediterranean/North Atlantic, but it still called for maintaining the quota system to protect the species.