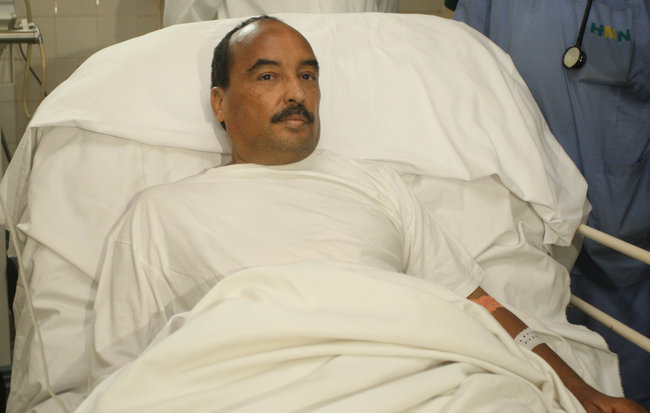 President Mohammed ould Abdelaziz was slightly injured Saturday after soldiers opened fire on his motorcade, reports said.
The president has been admitted to the military hospital in capital city, Nouakchott, where he underwent a surgery. On Sunday, he was airlifted to France for further medical treatment.
Official sources, trying to reassure the Mauritanian people, said that the “the president’s life is not in danger” and that the incident was caused by “friendly fires”.
Later on the president made an appearance on the state TV channel lying in his hospital bed and told citizens that he was fine and that he was mistakenly shot by an army patrol.
The official version is however hard to believe and some commentators have talked rather about an assassination attempt in a country where coups are the usual way to change Governments.
The assassination hypothesis is supported by the president’s tense relations with the opposition groups which have repeatedly criticized his management of the country and called him to leave power before the end of his term in 1914.
Other commentators do not rule out the involvement Al Qaeda in the Islamic Maghreb (AQIM) or other Al Qaeda affiliated groups in the attempt as these groups have already voiced death threats against the Mauritanian leader, who has repeatedly voiced resolve to struggle against the mounting terrorist threat in the Sahel  and to cooperate with the international community to this end.
Mauritanian authorities said few years ago that they aborted an Al Qaeda assassination plan targeting the president.
Was the incident an assassination attempt or was it caused by “friendly fires”? The answer is not clear yet.
Mohammed ould Abdelaziz Is the 8th Mauritanian president since the independence. He graduated from the military school in Meknes, Morocco, and joined the Mauritanian armed forces in 1977.
The president came to power after he led a military coup against the previous president Sidi Mouhmed Ould Shiek  Abdellahi  in 2008.
On July 18th,2009  he was elected president after he won 52.2 percent  of total votes.  However, the opposition cast doubts on the results of the presidential election and called it an “electoral coup”.