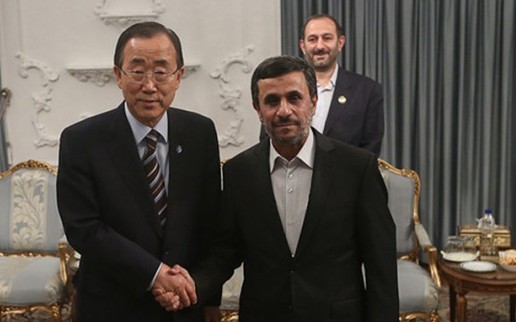 The summit of the Non Aligned Movement (NAM) in Tehran has barely begun before attacks from the outgoing country presiding over the movement led to a walkout by Syria. 120 states are in attendance for the two-day tri-annual event.
Opened by Iran’s Supreme leader, Ayatollah Khomeini, who stressed on his country’s ambitions to remain steadfast to their “right to peaceful nuclear energy” despite the sanctions, criticized the UN Security Council for its “undemocratic structure” and “overt dictatorship.”
UN’s Secretary General urged Iran into “fully complying with the relevant Security Council resolutions and thoroughly co-operating with the IAEA” because the issue might lead to a “war.” He warned that “a war of words can quickly spiral into a war of violence”. He also spoke about the hostilities between Israel and Iran.
Delegates from Syria left the conference room when Egypt’s President who doubles as the outgoing president of the Movement started talking about the crisis in Syria. He called for states to be in “full solidarity with the struggle of those seeking freedom and justice in Syria” because Assad’s “oppressive regime that has lost its legitimacy.” He said it was an “ethical duty” to implement “a clear political vision that supports a peaceful transition to a democratic system of rule.”
Syria’s delegation is led by its foreign minister, Walid Muallem, said Mursi’s speech was an “interference in Syria’s internal affairs and incites continued bloodshed in Syria.”
The movement is deemed to have lost its position on the international stage after the end of the Cold War between the US and the Soviet Union.