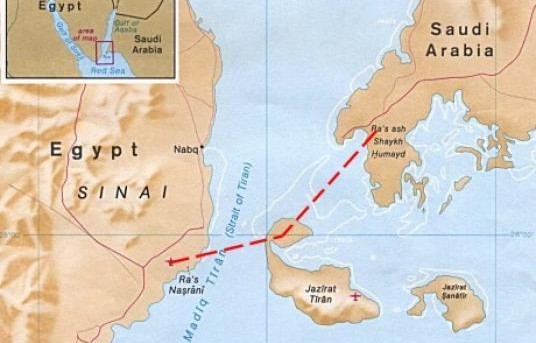 The causeway project to connect Saudi Arabia and Egypt is reactivated again after president Mursi’s visit to King Abdullah in the kingdom. The 32km causeway will start from Ras Nassrani in the Egyptian resort of Sharm El-Sheikh, passing by Tiran Strait before reaching Ras Hamid near Tabuk in northern Saudi Arabia. Mohammed Rashad, Egypt’s transportation minister, said a technical committee will be having a meeting by end of next month to evoke the initial stages of the project worth $3 billion.
The project has suffered setbacks in the past and political relations between the two countries led to its negligence. The transportation minister dwelled on the positive effects of the causeway such as easing the movement of people, goods, boosting trade and most of all during the religious period of Hajj and Umrah.
The ministry of commerce also welcomed the news. The chairman of Foreign Trade department under the ministry, Huissain Omran, had earlier on proclaim that the building of the causeway will lead to an automatic increase in trade for both countries before estimating that it will more than 300%, i.e. from $4,2 billion per annum to above $13 billion in just two years.
Dr Hisham Zaazoua, senior assistant to the Egyptian Tourism Minister, also expressed similar sentiments. He said tourists coming from Saudi Arabia could be quadrupled as it stands at only 300,000 per year. He went to say that it could even foster intra-Arab tourism between Egypt, Saudi Arabia and Jordan. Southern Sinai could also see an economic lift-up when the project is achieved, he concluded.