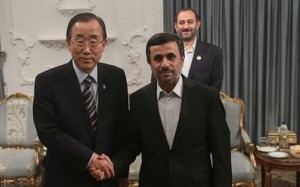 United Nations Secretary-General Ban Ki-moon (L) poses for a photo with Iran’s President Mahmoud Ahmadinejad (R) upon his arrival for the 16th summit of the Non-Aligned Movement in Tehran, August 29, 2012. REUTERS/Arash Khamooshi/ISNA/Handout (IRAN – Tags: POLITICS) FOR EDITORIAL USE ONLY. NOT FOR SALE FOR MARKETING OR ADVERTISING CAMPAIGNS. THIS IMAGE HAS BEEN SUPPLIED BY A THIRD PARTY. IT IS DISTRIBUTED, EXACTLY AS RECEIVED BY REUTERS, AS A SERVICE TO CLIENTS