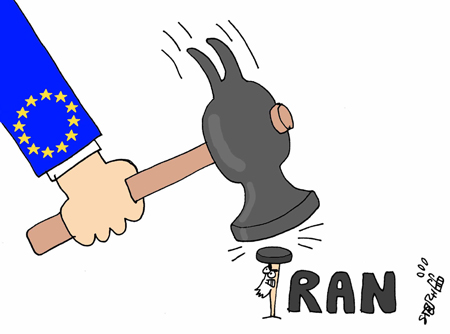 The EU has confirmed after a meeting of foreign ministers that it would not retract the sanctions it has levied on Iran and they will be implemented on the first day of next month. Iran at its end is focusing on new strategies to ease the pressure on its economy which has been paralyzed by the US sanctions. Reports have already stated that Iranian tankers have started changing names and dropping their flags in order to bypass EU sanctions. They have started registering with non-EU countries elsewhere like Tuvalu in the pacific and Tanzania in Africa.
One of its strategies is to issue bonds in order to execute natural gas projects due to the heavy investment involved. The bonds will be issued in dollars and rials and of the $4.2 billion bond, only a billion of it will be issued in a dollar denomination while the rest will be in rials. Many analysts believe that it won’t attract foreign interest because of the high inflation rate and the actual isolation of the country.
Following Iran’s military chief declaration that they could in defending the nation’s interest block the Strait of Hormuz, four US minesweepers have made their presence to be notice in the region in what was described by the US Navy as move to ensure the safety of ships criss-crossing the region. They will be around for seven months and will join forces with the already present US Fifth Fleet in the area.
Despite all this, another round of talks about Iran’s nuclear program  is set to be held on the 3rd of July in Turkey is almost around the corner.