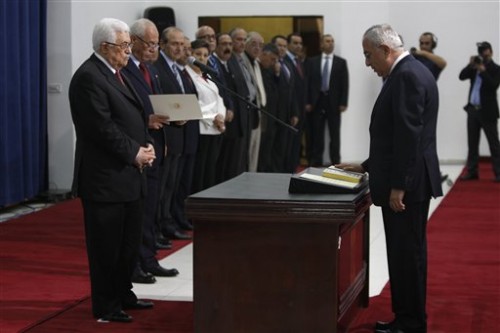 The West Bank formed a new cabinet which was sworn in by Mahmoud Abbas, Fatah’s leader and President of the Palestinian Authority. The new cabinet comprises of 25 members and is tasked with taking up from where the former one stopped.
Hamas has criticized the move of the president and its spokesman said the new “policy will not benefit the Palestinian people, because this government is not the choice of the Palestinian people and it does not have the support of the Palestinian Legislative Council”. He further went on to say that such a unilateral move by the President was against the Doha Declaration and the Cairo Agreement. These documents signed by Fatah and Hamas called for a unity government. The move was described as a “big error” by him.
A unity government was proposed between the two factions in order to bring an end to crisis between them to ease the reconciliation between the two because Hamas was having control over Gaza and Fatah controlling the West Bank, an interim composed of neutrals was to be selected by both parties. This interim cabinet has however resigned since February 2011.
President Abbas has cited the resignation of the cabinet members of the interim government as a major blow to the reconciliation. He has insisted on the reconciliation still being a possibility if they can strike a deal with Hamas. He said that “if we have an agreement with Hamas tomorrow or afterwards, this government will not have any role.”
The new cabinet’s activity is only limited within the West Bank.