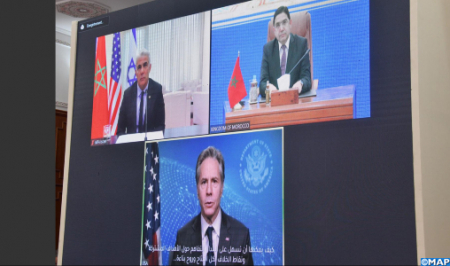 Morocco, the USA, and Israel celebrated on Wednesday the first anniversary of the joint trilateral declaration that was signed in Rabat on Dec.2020 before King Mohammed VI as a diplomatic achievement that has deepened ties, partnerships, and avenues to pursue shared goals, and widen the circle of peace.

IN a video conference organized on this occasion, the Foreign Ministers of the three countries, Nasser Bourita, Antony Blinken, and Yaïr Lapid have all hailed in their addresses the celebration of this first anniversary, as a celebration of a year of renewed peace between old friends, and as a celebration of shared past, present and future.

The agreement signed one year ago between Morocco, the United States and Israel is a “diplomatic achievement”, which has opened a new era of peace, stability, opportunities and understanding, said U.S. Secretary of State Antony Blinken.

Blinken recalled that following the signing of the joint declaration, Morocco and Israel opened their airspaces, “for the first time in decades”, with nearly ten direct flights a week between the two countries.

The two countries have also signed several agreements on joint military exercises and strengthened economic relations, he said, noting that a new Morocco-Israel Business Council helped setting up more than 30 partnerships in the sectors of technology, agriculture, water, textile, health, and renewables.

Discussions are underway to collaborate in desalination projects and set-up student-exchange programs, he added, noting that the establishment of diplomatic ties also created greater opportunities for cultural connections among the one million Israelis of Moroccan heritage.

“These steps aren’t positive only for Israel and Morocco, they’re also positive for the region as a whole,” Blinken pointed out.

Through the resumption of their relations, Morocco and Israel show the way for other countries to discuss openly and constructively their common goals and points of disagreement, seize mutually beneficial opportunities and bring people together, he underlined.

“The United States is committed to supporting and expanding the Abraham Accords,” he stressed in this regard.

“We’re grateful for your continued efforts to deepen and strengthen the bond between two great partners and friends of the United States, and we’re committed to continuing our work together to build a more peaceful and prosperous region,” Blinken said.

Under the joint declaration, the US also recognized Morocco’s sovereignty over its southern provinces, the Sahara, and renewed backing to the Morocco-proposed autonomy initiative for these provinces.

Nasser Bourita underlined in this connection that by asserting the recognition of Morocco’s sovereignty over its Sahara, as well as by reactivating the relationship with Israel, the Joint Trilateral Declaration carries a very high message of peace.

Bourita said Morocco highly values the wise decision of the United States to recognize Autonomy under Moroccan sovereignty as a realistic viable political solution under the auspices of the UN, of the long-standing regional dispute.

The Joint Trilateral Declaration is a valuable tool that can help move forward the cause of peace in the region, improve security and unlock new opportunities for all, Bourita stressed in his address during the videoconference.

Bourita also insisted on the Kingdom’s key role in fostering peace in the region, saying “Morocco, as a historic bridge-builder and credible actor of peace and stability, is firmly committed to help achieving a lasting peace in the region,” and reiterating Morocco’s position in support of the two-state solution.

“Under the Guidance of H.M. King Mohammed VI, the Kingdom will continue its endeavor in supporting a just, lasting and equitable peace based on the two-state solution: the State of Israël, and an independent Palestinian state within the borders of June 4, 1967, both living side by side in peace and security,” the Moroccan official underlined.

Moreover, as Chairman of the Al Quds Committee, King Mohammed VI is calling for the preservation of the “unique and sacred character of Al-Quds Acharif, and its spiritual significance and special vocation as a city of peace,” he recalled.

Bourita who welcomed the momentum generated by the deal with the US and Israel insisted that an ocean of opportunities awaits this trilateral cooperation in support of regional peace and stability.

“It is indeed our strong belief that the sea, be it the Mediterranean or the Atlantic Ocean, no longer separates our countries. It now connects them and turned into an ocean of opportunities,” said Bourita.

Highlighting the Jewish component of the centuries-old Moroccan identity, the minister stressed that in order for this Declaration to be meaningful, People should remain at the very beginning and at the receiving end of this partnership.

“We could consider that we have succeeded, when the one million Israelis of Moroccan origin can renew with their heritage and visit the land where their ancestors have lived in peace and harmony, under the protection of the Moroccan Monarchs,” he said.

“We can concretize the Qualifying Industrial Zones. We can implement trilateral projects open to other countries and regions; and above all, we can and must expand the circle of those involved in our partnership,” he said.

The Israeli Foreign Minister Yaïr Lapid on his part hailed the trilateral declaration’s first anniversary as a celebration of a year of renewed peace between old friends and stressed the need for Morocco and Israel to continue to build up and strengthen their bilateral ties.

“We are celebrating a year of renewed peace between old friends. The ties between our peoples are deep and the relations between our countries are stronger than ever,” he said, stressing that “today we are building closer relations between peoples and between economic actors with a view to securing a more in-depth strategic cooperation”.

Commenting his visit to Morocco last August, Lapid said it was “one of the highlights” of his tenure as Minister.

The videoconference was also attended by the Chargé d’Affaires of the U.S. embassy in Morocco, David Greene.