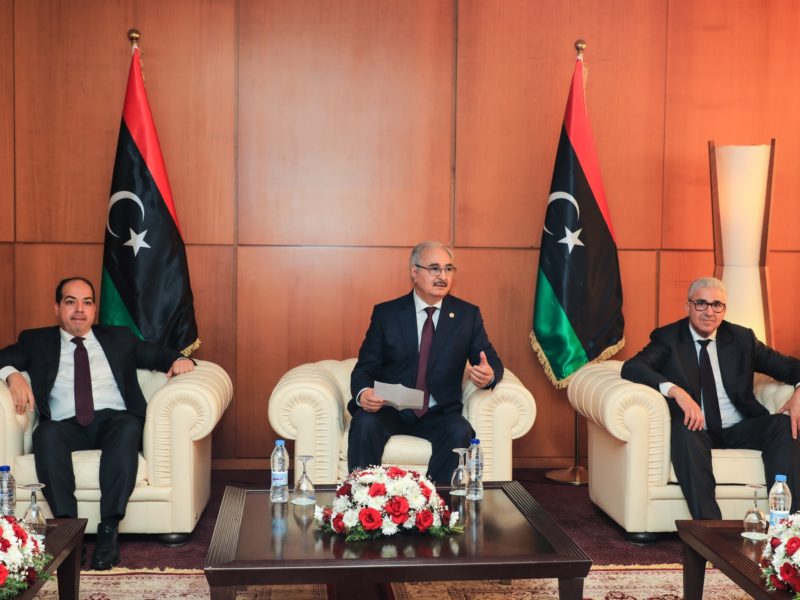 Khalifa Haftar, a presidential candidate for almost impossible Libyan Dec. 24 elections and strongman of the oil-rich African country’s eastern regions, marshalled around him Tuesday several other candidates including former powerful Interior minister Fathi Bashagha, to bring together their visions for the upcoming stage of the political process, Libya Observer reports.
The meeting held at Benghazi Tebisty Hotel also saw in attendance Ahmed Maiteeq, who was a member of the previous Presidential Council, Aref Al-Nayed, Mohammed Muntasser, Al-Sharif Al-Wafi and Abdelmajid Siaf Al-Nasser.
Bashgha and Maiteeq, both from Mistra, were arch opponent of Haftar who saw to overthrow during a year-long offensive, the former Presidential Council and allied Government of National Accord (GNA).
Bashgha after the meeting, the Libyan media reports, indicated that he was generously invited by candidate Haftar to reaffirm unity of national efforts to deal with the developments and to respect the aspirations of 2.5 million Libyans who are awaiting the date of holding presidential and parliamentary elections, adding that national reconciliation is second to none and is a national choice that cannot be ignored.
The meeting between Haftar and Bashgha, is not the first, reports say. They reportedly held several meetings off the camera. Sources however in Benghazi told Libya Observer that the meeting is in fact a way to agree on forming a new government to replace the Government of National Unity headed by Abdul-Hamid Dbeibah with the impossibility of holding elections on December 24.
Scheduled to take place on Dec. 24, the Libyan presidential polls appear impossible. Speaking at a seminar titled “Role of Women in Political Process” in Tripoli, Dbeibah, himself a candidate, said Libya elections must be based on three stages and the lack of one of them led to the failure of December 24 vote. Several voices in the country and outside the country called for the postponement of the elections over several challenges including security electoral irregularities.