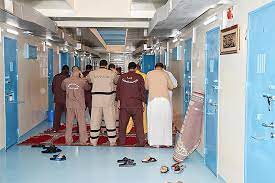 Kuwaiti local media reported that prisoners sentenced to less than three years in in Kuwait will be allowed to serve their jail term in the comfort of their homes, provided they agree to wear a surveillance bracelet that tracks their movements at all times.
Assistant Undersecretary for Correctional Institutions Affairs and Sentences Enforcement Department at the Ministry of Interior, Major-General Talal Ma’arafi, announced the humanitarian initiative, and added that this will be done in coordination with the Public Prosecution.
He stressed that the prisoner must first sign an undertaking agreeing to these terms, and be fully committed to remain within the permissible area and must not move to any other place, their personal phone must also remain open 24/7. The convict must also give a pledge not to use any jamming device inside their residence or tamper with the bracelet, by either removing it or damaging it in any way.
Major-General Ma’arafi added that in the event of illness, the prisoner must take approval to go to the Correctional Institution Hospital, and in this case his movement will be tracked from his residence to the hospital and back home.
He also pointed out that this initiative was part of the state’s humanitarian efforts and upon directives of Interior Minister Sheikh Thamer Al Ali, and follow up of the Undersecretary of the Ministry of Interior Sheikh Faisal Al Nawaf.