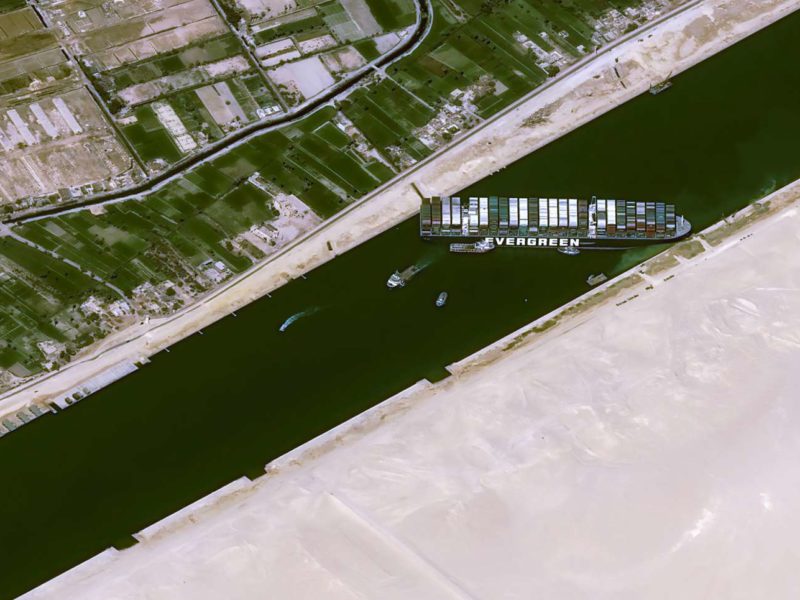 Egyptian authorities Thursday announced temporal suspension of navigation in the Suez Canal until the completion of flotation work of the stuck vessel.
“Admiral Osama Rabie, Chairman and Managing Director of the Suez Canal Authority has announced today; Thursday March 25th, 2021, that navigation through the Suez Canal is temporarily suspended. That is only until the floatation works of the large Panamanian container vessel EVER GIVEN; that ran aground at the 151 km area (Canal Marking), are complete,” the media office of the Suez Canal Authority said in a statement.
EVER GIVEN blocked diagonally Tuesday the important maritime route connecting Asia to Europe after it was knocked off course by strong winds.
The 400-meter long vessel is operated by Taiwan-based Ever Green company.
Egypt authorities launched Thursday’s operation to refloat the vessel using eight tugboats, dredgers, and the aid of high tides.
Media, the New Arab reports, were Tuesday banned from reporting on the grounding of the ship heading the port city of Rotterdam in the Netherlands from China, until issuance of the official statement.
A cabinet source, the London-based news outlet reports told its Arabic service on Wednesday that the Suez Canal Authority will conduct an inquiry to ascertain whether the ship had exceeded its maximum capacity.
The salvage operation could take weeks, Peter Berdowski, CEO of Dutch company Boskalis which is trying to free the ship, told the Dutch television program “Nieuwsuur.”