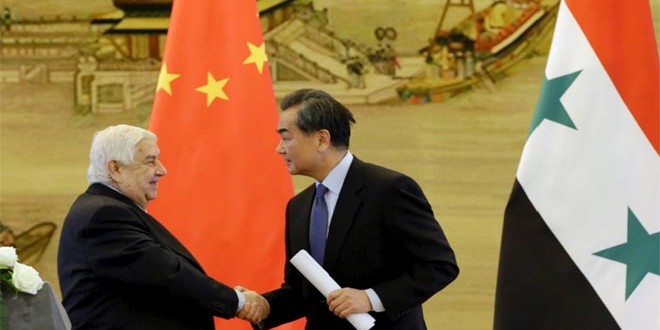 China’s special envoy for Syria Xie Xiaoyan presently on a regional tour told reporters that Beijing “defends Syria’s sovereignty and territorial integrity.” He invited all the parties engaged in the ongoing war to “resolve their problems by increasing their communication” while highlighting that he is playing the “role of a mediator and trying to maintain communication between sides.”

China wants the Syrian war to be resolved in accordance with resolutions of the UN Security Council, he said, insisting that the “Syrian people will decide on the future of Syria” since the crisis is “absolutely internal to the country.”

Beijing is known for adopting a non-interference foreign policy in the domestic affairs of countries while pursuing its economic interests and financial investments.

Special envoy Xiaoyan said China is willing to help in accelerating the political solution process in order to avoid what has been experienced in Iraq and Libya, which are still struggling to ensure stability on their respective territories since the ousting of Saddam Hussein and Colonel Gaddafi.

He commended the agreement for the establishment of de-escalation zones at the Astana talks and applauded the international community for undertaking “actions to ease tensions and promote new thinking and ideas for the political settlement of the crisis.”

Russia is determined to ensure that the zones are respected. Colonel General Sergei Rudskoi told a news conference Monday that Russia set up two checkpoints and four monitoring posts in one of the zones, in the area known as eastern Ghouta.

There are plans to extend the des-escalation zone approach to other parts of Syria if it is successful in quelling hostilities between rival camps.