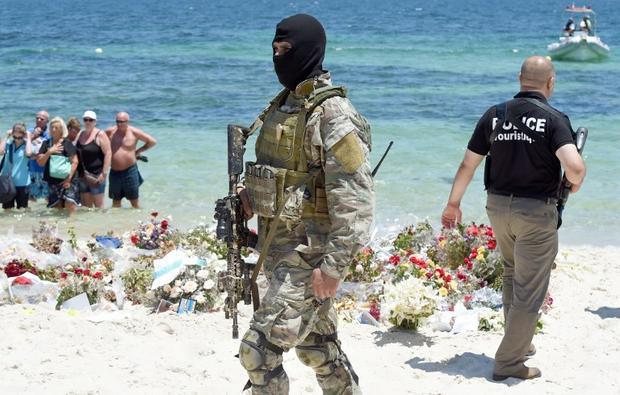 Six policemen present during the June 2015 attack on a Hotel in the Tunisian resort of Sousse, during which 38 people including 30 British holidaymakers, will appear in the dock for deliberate slow response to the attack.

Seifeddine Rezgui, a Tunisian Islamic State Group militant in June 2015 popped up at the Hotel in Sousse and its adjacent beach and mowed down the 38 victims, using a Kalashnikov and grenades, under the nose of hotel security agents.

The IS militant was shot down by police as he was leaving the scene several minutes after he started the shooting.

The six policemen according to Sofiene Sliti, spokesman for the judiciary’s counter-terrorism section are part of 33 people sued in connection with the attack.

Sliti further noted that the men charged with “failing to come to the assistance of a person in danger” will remain free pending trial. Fourteen people of the indicted have been in custody, six out on bail, while seven are on the run and will be tried in absentia.

Investigation of the beach massacre was closed in July last year but it was only in recent days that the case was referred to the criminal court, reports say.

The announcement of the trial of the six policemen came just a day after British judge Nicholas Loraine-Smith leading the inquest into the death of the 30 British citizens laid into the Tunisian security authorities in his findings.

“Their response could and should have been more effective,” he said. “The response by the police was at best shambolic, at worst cowardly.”

Following the attack, London advised its citizens not to travel to Tunisia except on special trips.