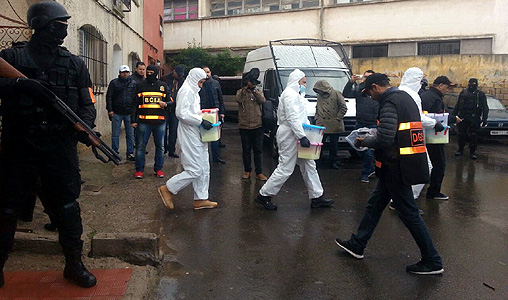 Moroccan security services have foiled this Friday another terror plot with the arrest of a jihadist cell linked to the Islamic extremist group ISIS. The seven-member cell was active in several Moroccan cities including El Jadida, Salé, El Gara, the rural commune of Boulaâouane and the Maatallah village in the province of Taza, Eastern Morocco.

Two waistcoats with explosive belts were seized, says the Ministry, noting that the captured jihadists were planning to recruit young people and incite them to carry out terrorist acts to undermine the North African Kingdom’s stability.

Moroccan authorities are waging tireless war against Islamist extremists and fanatics. As the international coalition intensified its airstrikes against the terrorists in Iraq and Syria, the extremist group started moving to North Africa and particularly to Libya where the jihadists have enhanced their influence and presence.

Neighboring Tunisia and Egypt have already suffered numerous deadly attacks by militants of the Islamic State.