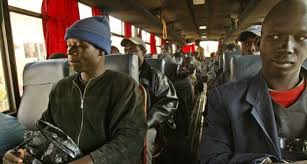 Morocco has sent an emergency humanitarian assistance to hundreds of sub-Saharan African nationals deported by Algerian authorities to Niger in violation of international humanitarian laws and conventions.

As soon as King Mohammed VI heard the news of the sufferings and hardships of the Africans expelled to Niger, he gave directives to airlift emergency aid to alleviate their anguish and distress.

A Moroccan military plane loaded with humanitarian assistance touched down Friday at the airport of Agadez. The plane of the Moroccan royal air force, to be followed by other humanitarian flights, delivered to Nigerian authorities 15 tons of foodstuff and 20 other tons including tents and blankets.

Morocco has pledged to send 116 tons of humanitarian assistance to Niger, a move that shows the North African Kingdom’s solidarity with African countries and peoples in times of extreme urgency and needs.

This humanitarian aid will help Nigerien authorities cope with unprecedented waves of Africans in desperate situation rebuffed by Algeria.

Algerian authorities arrested more than 1400 sub-Saharan migrants in Algiers and bused them to the desert city of Tamanrasset, wherefrom they were deported to Niger.