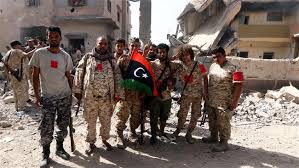 The Libya National Army (LNA) launched airstrikes on the Defense Benghazi Brigades (DBB) in the Al-Jufra region killing one of its commanders and injuring 14 others.

The “two air raids” according to Mohamed Abu Ras al-Sharif, an Al-Jufra notable, targeted the military airbase which serves as DBB’s headquarters. The al-Jufra airbase is the second most important airbase in Libya. The attack is believed to be a response to the recent offensive on the Essidra oil terminal by forces loyal to the U.N-backed Government of National Accord (GNA) under the command of the Defense Minister-designate, Mihdi Al-Barghathi.

Field Marshall Khalifa Haftar, commander of the LNA, has declared the central region in Libya from Sirte in the west and Ben Jawad in the east to Al-Jufra in the south as a military zone and warned that any military operation in the area with prior approval would be bombed.

The DBB is loyal to the GNA. Brigadier General Edriss Bu Gwaitin, Commander of Brigade 12 Infantry of the GNA, described Thursday’s attack as an attack on the government. The attack could lead to an open confrontation between forces of the Tobruk-based House of Representatives and the GNA in Tripoli as Colonel Najmi Ramadan Khair Al-Nakua revealed that recruitment for the formation of the Presidency Council’s Presidential Guard, would begin by next week.

The Presidential Guard will play a key role in protecting the infrastructures of the State and international organizations. Its establishment could lead to the lifting of the UN arms embargo, according to UN Special Envoy Martin Kobler.

The LNA is enjoying the support of neighboring Egypt and the United Arab Emirates as well as Russia where Haftar was recently on a two-day visit for discussions on defense and security matters.