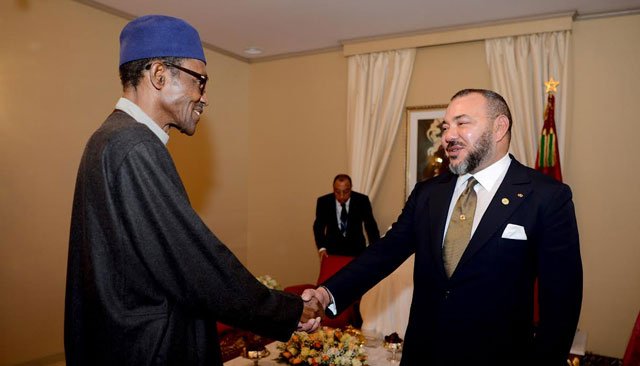 King Mohammed VI started Thursday an official visit to Nigeria, the first ever by a Moroccan Monarch to the African country, heralding thus the start of a new era in relations between the two countries.
The visit evidences, if need be, the Sovereign’s insightful vision and clear-sighted leadership in strengthening his country’s relations with the rest of Africa, the ultimate goal being the integration of the continent and the advent of an Africa that is in control of its own destiny.
The royal visit also illustrates Morocco’s choice to diversify its partnerships, both geopolitically and economically, confirms that Morocco’s African policy has a continental scope that goes beyond West and Central Africa, and seeks to extend the model of South-South cooperation that Morocco has developed with its traditional partners on the continent.
It is precisely in this context that the royal visit to Nigeria is taking place, and through which the King hopes to open a new page in relations between Rabat and Abuja.
These relations, dating back to 1960 when Nigeria recovered its independence, were marked for many years with the seal of solidarity, rapprochement and respect for territorial integrity.
Nigerian Foreign minister, Goeffrey Onyeama, said in a statement to the media that King Mohammed VI’s visit will definitely mark the beginning of a promising chapter in cooperation relations between the two countries.
This royal visit represents a milestone in the strengthening of bilateral relations at political, economic and human levels, Onyeama said, adding that Rabat and Abuja are determined to strengthen their economic and trade exchanges.
The visit will promote exchanges and a better understanding between the two brotherly countries on many issues related to bilateral relations as well as to the situation in the African continent, the Nigerian official was quoted by the Moroccan News Agency MAP as saying.
He said Morocco and Nigeria have all assets to initiate a mutually beneficial cooperation and develop a win-win partnership in accordance with the principles of South-South solidarity, advocated by King Mohammed VI.

The Nigerian official cited, among the strategic sectors that will be at the core of Moroccan-Nigerian partnership, agriculture, infrastructure and energy, mainly renewable energies.

Beyond economic spheres, he said bilateral cooperation will encompass issues related to peace and the fight against terrorism and extremism.
The Nigerian official hailed in this regard Morocco’s recognized expertise in combating terrorism and spreading the values of peace and tolerance around the world.
“Morocco has undoubtedly so many achievements in the fight against terrorism, radicalism and violent extremism,” he said underscoring that Morocco is a reliable partner, particularly for many sub-Saharan African countries and that all the countries of the region would like to develop closer cooperation with Morocco in this area.

“The fight against terrorism, violent extremism and radicalism requires close cooperation between all countries,” he said.
During King Mohammed VI’s visit to Nigeria, the third leg of his new African tour that already took him to Ethiopia and Madagascar, the two countries are expected to seal several cooperation agreements, through which Morocco will contribute to the economic and commercial development of Nigeria, within the framework of a fruitful and mutually beneficial South/South cooperation.