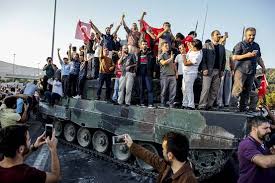 Ankara’s crackdown on the foiled July 15 coup, allegedly masterminded by Fethullah Gulen on self-imposed exile in the US, continued shortly after the announcement that the state of emergency expiring on October 19 would be extended by three months.

In the latest crackdown, 12,801 police officers, including 2,523 police chiefs, were suspended on Tuesday.

A statement stated that the suspended officers “have been assessed to have communications or links to the Gulenist Terror Organization, identified as a threat to national security.” The number is significant because it represents more than 5% of the police force excluding those who were suspended just after the attempted coup d’état.

Gulen has denied any role in the coup and refuted allegations that his supporters were behind it while critics accuse the government of using the failed coup as an opportunity to get rid of its opponents. Ankara has denied such claims and Deputy Prime Minister and Government Spokesman, Numan Kurtulmus, said the extension of the state of emergency will help to wipe out “terrorist organizations”.

Gulen, his supporters and organization are considered as terrorists. The emergency allows the president and cabinet effectively to rule by decree, bypassing parliament when drafting new laws. The state of emergency enables to restrict or suspend rights and freedoms.

The police force also stormed the IMC TV station and interrupted its transmission before pulling it off air on Tuesday. The Kurdish TV station is accused of “spreading terrorist propaganda.” The Turkish government is battling Kurdish forces in Iraq and Syria and considers their armed groups as a security threat. More than 130 media outlets have been shut down by authorities since July.