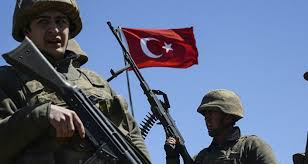 President Erdogan’s spokesman, Ibrahim Kalin, has stressed that as much as Ankara is determined to get rid of the Islamic State, it has its “principles and conditions on the issue.” He pointed out that “it is out of question for us to take part in an operation in which the PYD/YPG are present” even though “we support Raqqa and the other Syrian cities being cleansed from Daesh.”

The People’s Protection Unit (YPG) is the military arm of the Syrian Kurdish Democratic Union Party (PYD) but Turkey considers them as a threat to its national security and believes that they are a close ally of the Kurdistan Workers Party (PKK) that it has been battling for decades at the northern part of its border with Iraq.

Kalin admitted that “negotiations are still ongoing”, probably with the US, but there is yet to be agreement because “our principled stance is the same as it was with Manbij and Jarablus” when Operation Euphrates Shield was launched almost a month ago.

Defense Minister Fikri Isik expressed a similar position as he outlined that their “current planning” is collaborating with the opposition Free Syrian Army to conduct operations but that will not include Turkish infantries; thereby limiting their role to airstrikes and intelligence sharing. He said Turkey will continue Operation Euphrates Shield “until it guarantees its own security.”

Ankara is planning to launch an offensive on the town of Al-Bab before attacking Raqqa, Islamic State’s self-declared capital, according to Foreign Minister Meclut Cavusoglu.

Turkey is not comfortable having armed Kurdish groups along its border as the conspiracy of the Kurds planning to establish their own state will barricade its territorial connection with other Middle Eastern states if it shall become a reality. The PKK has long been fighting for its independence before the war in Syria began.