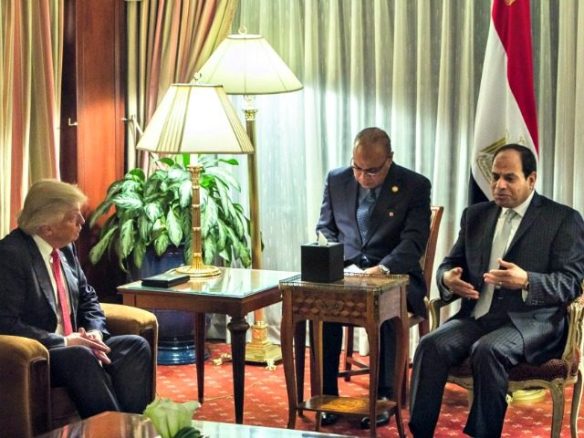 After US presidential candidates, Donald Trump and Hilary Clinton, met with the Egyptian president Abdel Fattah el-Sisi on Monday, the latter in an interview with CNN said he has “no doubt” that the Republican candidate Donald Trump would make a strong leader if elected in the November elections. Asked about the latter’s proposed immigration policy of “a total and complete shutdown of Muslims entering the United States” that has been watered down last month to “extreme vetting” to determine if they uphold US values before entering the country, President Sisi pointed out that campaign declarations and political realities are different things.

“I don’t want to be unfair to anyone here. During election campaigns, there is a perception based on a certain vision and a point of view. Then that vision or point of view gets corrected and develops as a result of experience, reports and advice from experts.”

The Egyptian president’s remarks could be seen as a boost to the Trump camp that stated that the US “will be a loyal friend – not simply an ally- that Egypt can count on us in the days and years ahead” if they are elected to the White House.

The Sisi-Trump meeting also focused on fighting “a common enemy” by “working together in defeating radical Islamic terrorism.”

President Sisi was not as appreciative of the Democratic Party’s presidential candidate as he is of Trump.

Asked whether Clinton will make a “good president”, Sisi responded by explaining that the “political parties in the United States would not allow candidates to reach that level unless they are qualified to lead a country the size of the United States of America.”

Clinton had earlier this year criticized Sisi’s administration of taking Egypt back to “basically an army dictatorship.” Their meeting this week focused on fighting extremist groups although she raised “concerns about the prosecution of Egyptian human rights organizations and activists.”

Egypt is a strategic ally of the US in the Middle East and North Africa as well as in the Arab World and the aspiring US presidents will need to work with Cairo to continue propagating their influence in the region.