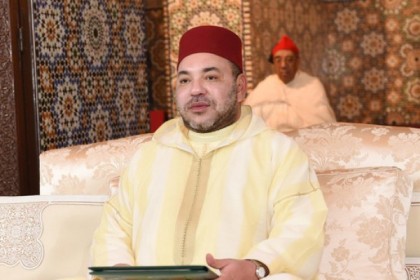 King Mohammed VI of Morocco condemned Saturday all forms of terrorism and those who kill innocent people in the name of Islam, saying the Islamic religion does not permit the slaying of innocent people or any kind of suicide for whatever the reasons.

In a speech he delivered on the occasion of the 63rd anniversary of the Revolution of the King and the People, the Moroccan Sovereign said “those who engage in terrorism, in the name of Islam, are not Muslims”, stressing that “their only link to Islam is the pretexts they use to justify their crimes and their folly.”

These terrorists “have strayed from the right path, and their fate is to dwell forever in hell. They think – out of ignorance – that they are engaging in jihad. Since when has jihad been synonymous with killing innocent people?” wondered the Monarch.

“Is it conceivable that God – the Most Merciful, the Most Compassionate – could order someone to blow himself up or kill innocent people? added the Sovereign, affirming that Islam is a religion of peace and tolerance.

As for jihad in Islam, it is governed by specific conditions, including the fact that it is to be resorted to only for defense purposes – not for murder or aggression. It is forbidden to kill people under the pretext of jihad, insisted King Mohammed VI.

Also, to be valid, jihad would have to be called for by the Commandership of the Faithful – and not by an individual or group of people, underlined the Moroccan Sovereign, saying that “those who call for murder and aggression, those who excommunicate people without a legitimate reason, those who interpret the Quran and the Sunnah to suit their purposes, are actually lying to Allah and His Messenger.”

According to King Mohammed VI, terrorists take advantage of some young Muslims – particularly in Europe – and of their ignorance of the Arabic language and of true Islam, to spread their distorted messages and misleading promises.

The Sovereign also said that “several Muslim groups and societies perceive themselves as authorities on Islam”, but in reality, they are far from Islam and its tolerant values.

Such attitudes encourage the spread of the extremist ideology, of excommunication and terrorism, for terror advocates believe that this is the path to true Islam, stressed the Sovereign, calling on these strayed people to take a hard look at themselves and decide to what extent they are responsible for the crimes and human tragedies perpetrated in the name of Islam.

“All of us are targets. Whoever thinks or believes in what I have just said is a target of terrorism”, warned the Sovereign, urging Muslims, Christians and Jews to unify ranks to counter extremism, hatred and reclusiveness.

Morocco was hit by terrorism as Europe and many parts of the world. And as ignorance spreads in the name of religion, all people of the Book should stand united against the fanatics and extremists, said King Mohammed VI.