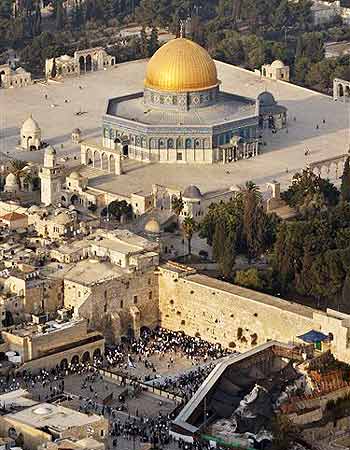 A draft circulated by European Union member states at UNESCO’s World Heritage Committee gathering in Istanbul has angered Tel Aviv as it likened it to a Palestinian-Jordanian draft tabled last week that sidelined the connections of Jews to the Temple Mount, known to the Muslims as Haram-al Sharif.

Israeli foreign ministry spokesman Emmanuel Nahshon reacted to the draft in a tweet pointing out that “denying Jewish Jerusalem and Temple Mount amounts to denying the roots of Christian Europe. Will EU members agree to that? Crazy”

The EU has toughen its position on the Israeli-Palestinian conflict over the past couple of years. Israel’s representative to UNESCO, Ambassador Carmel Shama Hacohen, said “a European consensus in favor of severing the Jewish connection with the Temple Mount is a new record for hypocrisy.” Hacohen added that Israel’s control of the religious historical site has allowed the freedom of worship and protection from extremist Islamist groups such as ISIS.

Israel and EU have been at loggerheads over Israeli policies in occupied Palestinian territories and relations hit a new low after EU-funded structures were razed to the ground.

According to EU Observers, an internal report, drafted and endorsed last year by all EU countries having embassies in Israel and Palestine, stated that the “proximate cause” of the increased “spontaneous” individual attacks against Israelis that began in October 2015 was linked to developments surrounding Haram al-Sharif. The report imputes the escalation especially to the fact that right-wing Israeli politicians and religious groups began questioning the status quo that grants Arabs rights to govern access to the site.

More than 35 Israelis and 200 Palestinians have died since the upsurge began and reports highlighted that the “new reality” came “against a backdrop of deep frustration amongst Palestinians over the effects of the occupation, and a lack of hope that a negotiated solution can bring it to an end”.