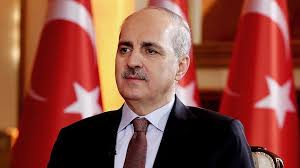 Turkish Deputy Prime Minister Numan Kurtulmus warned that the Syrian war “will result in proxy wars in the Middle East via Syria” if not solved and that “those who are behind the proxy war in Syria” would be dealing with a “gradual global war.”

The U.S. and the Gulf states are the main supporters of the rebel groups in the Syrian war, while the Assad regime enjoys the backing of Russia, Iran and Hezbollah.

In an interview with a local media, Kurtulmus said he believes that “rapprochement between Turkey and Russia will facilitate the resolution of the Syrian conflict” but does not expect it to happen quickly because of “their important differences of opinion.”

Some of the leaders of rebel groups fighting in Syria are based in Turkey.

The deputy prime minister said finding a solution to the Syrian war calls for cooperation explaining that Ankara supports “a transitional period” with a new constitution but Assad’s Baath party should be excluded from elections because “it’s now a bloody-handed party.”

The world’s leading super powers, Russia and the U.S., are engaged in the Syrian conflict and are on opposing sides. A meeting between foreign minister Sergei Lavrov and Secretary of State John Kerry ended Thursday without any discussion on the two super powers’ cooperation in Syria.

Kremlin spokesman Dmitry Peskov said “a lot of questions remain regarding real interaction in implementing operations in Syria” but didn’t go into details.

Neighboring Turkey is not part of the coalition but has granted access to one of its air bases to the US-led coalition. Meanwhile, Turkey carries out its own raids against targets considered as threats to its security.