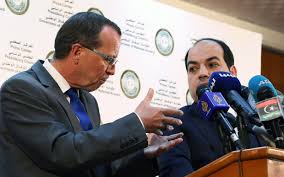 U.N Secretary General’s special envoy for Libya, Martin Kobler, acknowledged that the UN-backed Government of National Accord (GNA) lacks “national legitimacy” and “there is political stalemate, and the security is not good, and there are grave humanitarian problems in the country.”

Admitting that assuring security is vital to launching a credible transitional process, Kobler stated that the several armed militias groups need to be disbanded and disarmed to prevent a “civil war” because “you can’t have a united Libya with two or three armies.” He further stated that three regional military councils could be established probably under the demarcations of the historic Tripolitania (west), Cyrenaica (east) and Fezzan (south.) He said he however remains supportive of a “united Libyan army structure.”

Kobler made the statements in an interview with Associated Press after meeting with various Libyan leaders in Cairo as part of talks to end the rivalry between the different groups.

Although Kobler did not go into details, the proposal to form regional militia groups could be a huge challenge as groups within the same region are divided and are loyal to different political authorities.

The Petroleum Facilities Guard (PFG) headed by Ibrahim Jodhran supports the GNA and is opposed to Khalifa Haftar, head of the Libyan National Army. The Zintan brigades in the west are loyal to Haftar. The situation is complicated in the south as well where different areas are held by different groups.

So far, Kobler had not meet Haftar, who has repeatedly declined Kobler’s requests for a meeting. MP Tareq Jaroushi said that Hafter did not have time for political horse-trading and that he was following the battle against the terrorist column moving against Benghazi.”

Despite their political and military differences, the different Libyan groups are against the presence of the Islamic State in the country.