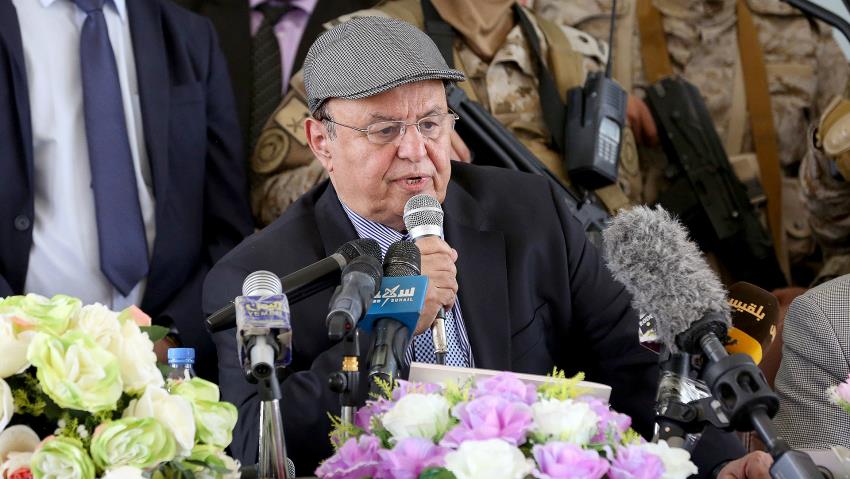 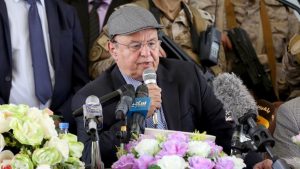 President Hadi of Yemen made a surprise visit to the governorate of Marid, South of Sana’a, ahead of an operation to liberate the capital and other provinces.

He vowed that celebrations will “soon” begin as he promised flying Yemen’s flag in liberated areas when they “clear the country of rebels.” At the same occasion, Hadi warned the UN that his government would withdraw from the peace talks with the Houthi Movement in Kuwait “if the United Nations tries to impose the latest proposal by mediator Ismail Ould Cheikh Ahmed.”

The UN special envoy to Yemen proposed a peace roadmap that provides for the formation of a transitional unity government, the withdrawal of Houthis from occupied territories and their disarmament.

President Hadi decried the proposal as “legitimating their (Houthi Movement) coup d’état” against his government and stressed that “the Yemenis will not allow Yemen to be turned into a Persian State,” alluding to Tehran which is a major supporter of the Houthi Movement. Hadi added that the UN tried to convince them to accept the formation of “a coalition government” but warned that “a statement declaring our boycott of the Kuwait consultations” will be issued if it is not in conformity with resolution 2216 of the UN Security Council. The resolution demands that the Houthis withdraw from all seized areas and relinquish their arms.

The Houthis ousted Hadi’s government in 2014 and placed him together with other senior officials under house arrest after forcing him to resign. The rebel group dissolved the government and parliament and formed a Supreme Revolutionary Committee.

At the talks in Kuwait, the Houthis require that their withdrawal from occupied territories be based on agreeing on a new president to manage the transition.

The two sides have been on a two-week break from the talks, expected to resume on Friday. UN Secretary General Ban Ki-moon met with the two delegations on Sunday urging them to accept the roadmap proposal. Special envoy Ismail has been calling on both sides to make concessions in order to reach an agreement as fundamental differences continue to block an agreement.