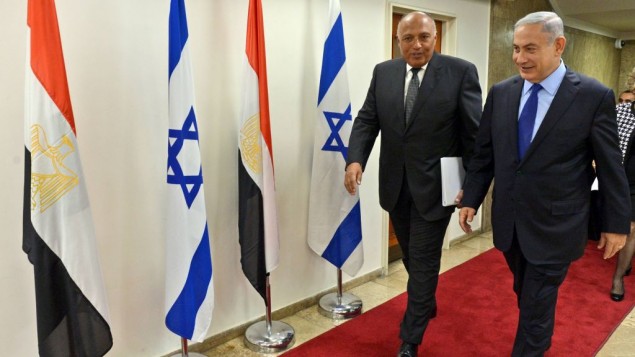 Egypt reiterated on Sunday its commitment to a just and comprehensive peace between Israel and Palestine and called Israelis and Palestinians to seize peace opportunities offered by France and the Arab leaders’ peace initiatives to end the long standing conflict putting the whole region into jeopardy.

Visiting Egyptian foreign minister Sameh Shoukry said at a joint press conference with Prime Minister Benjamin Netanyahu that “the current state of affairs unfortunately is neither stable nor sustainable” and called for confidence building between parties to reach “the vision of the two-state solution” under “a genuine will that does not waver away under any circumstances.” Netanyahu welcomed Cairo’s efforts to revive talks between Israel and Palestine but outlined that direct bilateral talks is the key to a solution. He cited the peace agreements the Jewish state reached with Egypt and Jordan as “critical assets” serving as a “cornerstone of regional stability.”

He said direct talks are “the only way we can address all the outstanding problems between us, and turn into a reality the vision of peace based on two states for two peoples.”

Shoukry said his visit to tel Aviv comes at “a crucial and challenging juncture for the Middle East” due to the rising terrorism in the region. The status-quo is “no longer acceptable” considering the aspirations of the Palestinian and Israeli peoples, he insisted. He explained that Palestinians yearn to establish an independent state based on the 1967 border with East Jerusalem as its capital and Israelis desire to live in peace, security and stability.

Israel has always rejected calls to withdraw from the territories it occupied during the 1967 war and last month, Netanyahu reiterated that there are no withdrawal plans from the occupied territories including East Jerusalem. Israel has also been calling for a demilitarized independent Palestinian state.

The Egyptian foreign minister who met with President Abbas and other senior Palestinian officials at the end of June said “the plight of the Palestinian people becomes more arduous every day and the dream of peace and security moves further out of the Israeli people’s reach as long as the conflict continues.” Shoukry called for a two-state solution based on “justice, legitimate rights and a mutual willingness to coexist peacefully” as neighbors.