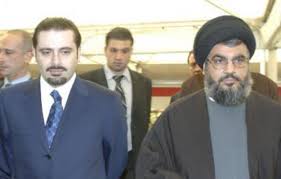 As part of celebrations marking Liberation and Resistance Day, Secretary General of Hezbollah Hassan Nasrallah accused Arab States of “inaction” against Israel. He claimed that the Jewish State is Lebanon’s “main and real enemy” and continues to be its “biggest threat” as it tries to “usurp our resources.”

He alleged that “some parties are seeking to turn it into a friend and ally” which he warned would affect “the entire axis of resistance” of the country.

Hezbollah, recently listed as a terrorist organization by the Gulf Cooperation Council and the Arab League, claimed that “individual incidents” are being used to “practice sectarian incitement in order to tear our people apart” and also weaken the army.

The group is a Shia politico-military group, which defines its armed group as a resistance army. It is close to Tehran and has been accused by the Gulf States of collaborating with Iran to destabilize them.

Former Lebanese Prime Minister Saad Hariri who returned to the country this year ending a self-imposed exile reacted to Nasrallah’s speech accusing him of holding the country at a ransom. He urged him to “listen to the opinion of the majority of the Lebanese people, including the silent majority of Shiites” before sending militants to fight in Syria and Yemen. Hariri is close to Riyadh. He reminded him of the presidential stalemate that is more than two years old and there are no signs of it ending soon.

Nasrallah in his televised speech said Hezbollah wants a new “modern and correct electoral law” to replace the current one approved in 1960 in order to promote “proportional representation.” Hezbollah is not the only party responsible for the failure to elect a president, he said warning that “if the term of the current parliament expires, we’re with holding the elections under any law.”

Thursday marks the beginning of the third year of the presidential vacuum in the country.