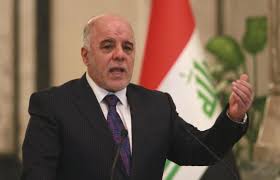 Iraq’s Prime Minister Haider al-Abadi called for the temporal suspension of the weekly Friday protests by followers of influential Shia cleric Muqtada al-Sadr to enable the military to focus on liberating Fallujah.

“We ask our dear young people to postpone their demonstrations until Fallujah is freed; this battle requires an important effort.” The protests have been held for several months and have recently focused on the Green Zone; the most significant of which was the storming of the parliament.

Abadi was on a visit to the Fallujah Operation Command on Thursday when he made the plea and explained that protests “would put pressure on our forces” that are often withdrawn from several parts of the capital to protect the premises of the heavily fortified Green Zone against the protesters. He acknowledged that “holding protests is a right” but priority should be given to the liberation of the country from the militants of the Islamic State.

The offensive on Fallujah began last weekend with the army stating that it will provide “secured routes” for civilians to leave the city. But it seems that only around 800 people have been able to flee, according to a statement from the UN humanitarian coordinator for Iraq, Lise Grande. She said those who fled the city said that there are still desperate civilians trapped and unable to escape. The Majority of those who fled are “mostly from outlying areas.” “People trapped in the city center are thought to be most at risk,” the UN official said

Prime Minister Abadi said the “main concern” of the security forces is “how to protect the civilians” and differentiating them from terrorists. He however called on Iraqis to be “vigilant and cautious” because IS will continue to target them.

Liberating Fallujah, the second most important city in Iraq controlled by the extremist group after Mosul, could take a while. Living conditions are reportedly worsening as food supplies are limited and strictly controlled, medicines exhausted and available water sources unsafe.