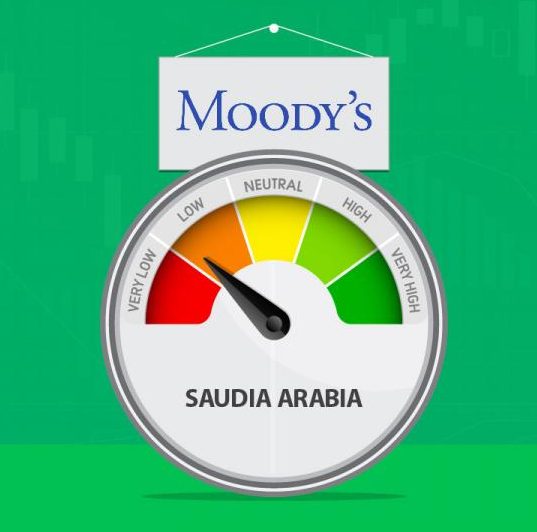 Over the weekend, credit rating company Moody’s downgraded Saudi Arabia by a notch from Aa3 to A1 citing that “a combination of lower growth, higher debt levels and smaller domestic and external buffers leave the Kingdom less well positioned to weather future shocks.”

Riyadh laid out several ambitious economic reform plans as part of its Vision 2030 geared towards diversifying its economy away from oil but they are currently at an early stage to make any impact as Moody pointed out that “lower oil prices have led to a material deterioration in Saudi Arabia’s credit profile.”

In a negative outlook, Moody outlined that “Saudi Arabia’s buffers will continue to erode” as foreign exchange reserves continue to dwindle from $731 billion in August 2014 to around $576 billion in March when the review was made. The government has a debt level of around 6% of GDP but it is expected to reach 35% in 2 years. This could mean further downgrades and costlier debt because of higher interest rates. Saudi Arabia is currently within Moody’s long-term investment grade territory and in its Prime-1 short-term rating. Over the coming five years, growth will average 2%, much lower than the 5% annual average recorded in 2011 to 2015.

Low oil prices are taking their toll on Saudi Arabia. The oil rich kingdom has the largest economy in the Arab world. It borrowed $10 billion from international banks in April and more borrowing is expected before the end of the year.

Oman and Bahrain were also affected by the review as they were downgraded to Baa1 from A3 and Ba2 from Ba1 respectively. Kuwait, Qatar, the United Arab Emirates were not downgraded but were given a negative outlook.

With oil producing and exporting countries yet to reach an agreement on means to boost oil prices, most of the countries will continue facing downgrades before their diversification programs become effective.