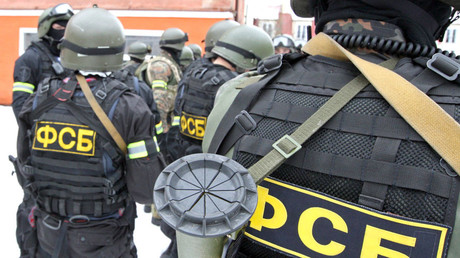 Federal Security Service (FSB) said they have arrested a group of alleged terrorists from Central Asian countries who were planning attacks in Moscow on May 9, day of massive street celebrations to mark the anniversary of victory over Nazi Germany in World War II.

“We have found a large quantity of weapons, explosives and other terrorist equipment,” the FSB said in a statement.

“The suspects were planning to fire weapons into a crowd, during mass street celebrations on May 9,” FSB sources told Russian RT, adding that the suspects were acting on orders from senior terrorists based in Turkey and Syria.

The number of suspect and their nationalities were not officially disclosed, but according to press reports 12 people among whom nine men from Uzbekistan, one from Kirghizstan, and two Russians have been detained. The 12 men were reportedly living in the same apartment in suburban Moscow.

Forces who participated in the arrest operation said they found on their phones evidence of communication with terrorists from Syria and Turkey, and also documents on extremist organizations.

Russia has registered an increasing number of terror plots following its military intervention in Syria on the side of Assad’s regime against the extremist groups and the Islamic State (IS.)

FSB forces last week raided a Salafist prayer house in the central Russian city of Samara, according to RT. The forces reportedly found an explosive device and a weapons cache in the building. The forces also seized documents pledging allegiance to IS. Sixty men among alleged IS recruits were arrested in the raid.

In March, FSB forces also arrested around 20 alleged IS militants suspected for recruiting militants for the terrorist organization.