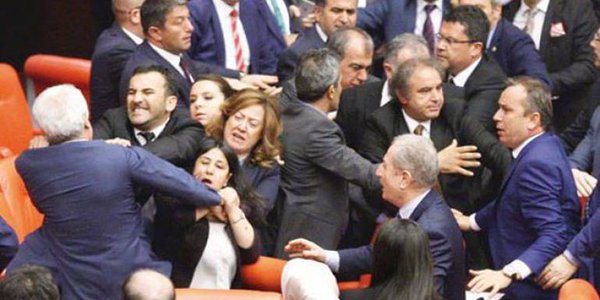 After the ruling Justice and Development Party (AKP) and the opposition People’s Democratic Party (HDP) exchanged blows, kicks and throwing objects at each other during a constitutional parliamentary commission meeting to lift immunity of lawmakers, the draft was adopted and would be passed on to the parliament for discussion and voting.

The ruling AKP considers HDP as a branch of the armed Kurdistan Workers Party (PKK) labeled by the government as a terrorist group.

Part of the proposal of the draft which would amend the constitution is the possibility to prosecute lawmakers from April 28 onwards but the HDP sees it as a witch-hunting action aimed at Kurds in the parliament especially after President Erdogan suspended talks with the PKK once the HDP entered parliament. The draft was approved by the unanimous vote of the AKP, the Republican People’s Party (CHP) and Nationalist Movement Party (MHP.)

Tense relations between AKP and HDP have worsened recently due to Turkish airstrikes in PKK occupied mountainous areas while the rebel group increased its bomb attacks in several Turkish cities. Erdogan said despite the profession and careers of HDP MPs, it does “not change the fact that they are actually terrorists.” In a speech last month he said the definition of terrorism would be broadened to include those who make terrorist acts possible. HDP denies any “organic connection” with the PKK but some of its members have attended funeral ceremonies of its militants and hailed them as martyrs.

The tension between the parties could be felt as HDP members yelled “Long Live Apo”, imprisoned leader of the PKK. They also sung the anthem of the rebel group that is fighting for independence.

Before Monday’s fight, the MPs has a brawl on Thursday and there are fears that matters could get out of hand when the draft is presented at a plenary parliamentary session.